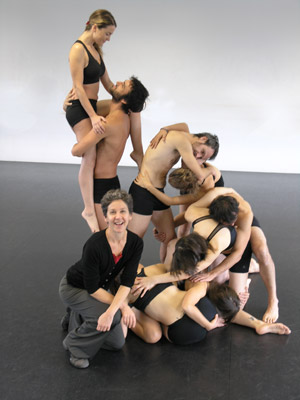 Becky Siegel was born in Denver Colorado (USA), and received her dance training in New York, where she studied with Martha Graham, Merce Cunningham, Melissa Hayden, and Maggie Black, among others. She danced with several important post-modern dance figures, including Jeannie Hutchins and Richard Bull, in whose improvisational company Siegel danced for many years. She received a Dance Degree at Barnard College (New York) and then formed her own company "Timebenders", collaborating with composers such as Borah Bergman and Michael Brennan.

In 1986 she moved to Barcelona where she created and performed various projects with composer Jordi Russinyol, and several productions with the clarinetist Miquel Gaspá and "Silenci", a Dance-Theatre Company.

During her stay in this city she was guest teacher for some of the most important Modern Dance Companies in Spain: Lanonima Imperial, Danat Dansa, Ballet Contemporani de Barcelona…

Since 1992 Siegel lives in Pamplona, where she teaches Modern Dance and Improvisation, and where she has collaborated in theatrical productions with directors such as Carmen Portaceli, Valentin Redin, Pablo Ramos, and Angel Sagües.

In 1994 she founded Tempomobile Compañía de Danza, for which she has created twelve full-length works which have been performed in many Spanish and German cities. Tempomobile’s repertory is known for its collaborations with musicians: Taller de música Sine Nomine, Kepa Junkera, Javier Paxariño, Mikel Errazkin, Paco Iglesias, Mikel Gaztelurrutia.

Siegel has a Masters in Performing Arts from the University Rey Juan Carlos (Madrid). She has been invited to speak in conferences about the relationship between philosophy and the arts, and an analysis of the sacred and the profane in dance.